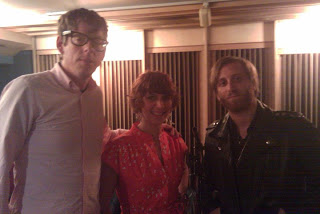 Posted at 19:05h in Uncategorized by Jeremy Sklarsky 0 Comments
In 2009/ 2010 Threshold Recording Studios in NYC began hosting the NY Times POPCAST series hosted by Ben Sisario. Recent sessions have included The Black Keys, Grace Potter, Junip featuring Jose Gonzalez, Josh Ritter, Jonsi from Sigur Ros, The Morning Benders. It has been awesome to have such varied and talented people come through the studio. You can check out POPCAST here on the NYTimes website or on iTunes.
Here’s a shot of The Black Keys with guest host Melena Kyzik after taping their episode.