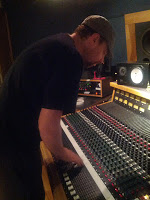 Posted at 01:16h in Uncategorized by James Walsh 0 Comments

Acclaimed cellist Dave Eggar was back, this time arranging and recording strings for American Idol winner Philip Phillip’s debut album “World from the Side of the Moon.” The album has already gone gold, selling ~600,000 copies since its late November release. It is always a privilege working with Dave. Congrats!

Perennial Threshold Recording Studios NYC favorites Edelweiss were back to record their newest single, “Withering Heights,” with music producer Jeremy Sklarsky. Since they were last here, Edelweiss released their record in Japan and played to enthusiastic crowds back in Pennsylvania and at the Knitting Factory in Brooklyn.

Singer, songwriter, and actress Rebecca Hart was in for her first new studio recording since 2006. “Valentine” is a beautiful acoustic song produced by Jeremy Sklarsky and features Dave Eggar on cello. Rebecca has been spending most of her time performing in musicals and other theater productions around the city but was excited to be back in the studio. Stay tuned to hear “Valentine” and hopefully much more to come.

Finally, Stargroves will be finishing up their debut album early this year. In the mean time, their debut single Westfjords, featuring Abigail Breslin, was nominated for a CMT listener’s choice award.