The return of Freelance Whales to Threshold Recording Studios! 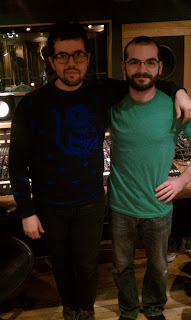 28 Mar The return of Freelance Whales to Threshold Recording Studios!

Posted at 18:50h in Uncategorized by Jeremy Sklarsky 0 Comments
Freelance Whales were back at Threshold Recording Studios NYC this month. This band is so great, it is always a pleasure to have them in the house. Big chunks of their highly regarded debut “Weathervanes” were done here at the studio with seasoned Threshold Producer, Engineer, Multi-instrumentalist Jeremy Sklarsky at the helm.
We’ll post a link to the song they recorded here upon its release, which should come sometime during their upcoming tour with Foals (which takes them across the continent including a co-headlining show at Terminal 5!).